The cut in gas flows from Russia to Europe has had a significant impact on the electricity market in Europe, but not for reasons that you might expect.

In response to the cut in flows, the European Commission mandated all countries to increase their gas storage. As a result, there has been significant activity since March to fill all gas storages in preparation for winter.  Current storage levels are at 95.55% (i.e. approximately 1,068 TWh) in the Europe according to AGSI above the mandated 80% target in 2022 (Gas Infrastructure Europe, 2022).

The increase in gas in storage created issues with electricity prices because:

This created a greater reliance on gas in the merit order, (and increasingly coal). With filling gas storage competing with gas fired power, the price spiked and as a result, so did power prices (as gas is a major input to electricity production). This also means that other lower carbon energy producers that draw market-based revenue from charging spot prices are achieving higher profits than usual.

Whilst electricity prices have tempered their rise, they’re still significantly higher than this time last year. According to SMARD, the spot price for electricity in Germany was above €500/MWh in August 2022, which was much higher than last year at €133/MWh.

This has impacted the industrial producers’ cost structure as well, lowering the economies of scale for most producers. In Germany, manufacturers, including those in the paper industry, were heavily impacted by the soaring energy prices, given the energy represents one of their highest overhead costs. As a result, many was forced to reduce production or stop operation like Hakle, the German toilet paper maker (Speed & Arnold, 2022).

European countries have implemented different policies to help energy consumers, including France, who has capped electricity prices at a maximum of 4% until the end of 2022. The EU commission is planning to introduce several emergency market interventions where the proposals include a temporary revenue cap and windfall tax to those low-cost energy producers (i.e. incurring production costs unrelated to high gas prices), and the government will collect excess revenue to support energy consumers in need. It is still in the proposal stage, and however EU commission intends to conclude the proposal no later than December 2022 (European Commission, 2022).

However, these measures are unlikely to impact those power producers that derive revenue from fixed rate contracts (i.e. CfD, FIT and PPAs) with prices already set below current spot prices. These producers would not make a windfall profit from these contracts as the counterparty will collect the excess. Thus, we will not adjust the revenue growth for contracted European renewable constituents at 7% in 2022 due to the energy crisis.

These measures will not impact utilities companies as they are regulated and not in a position to take advantage of changes in the energy market. They follow the allowable regulated rate of return.

There are mixed views on the initiatives. Implementing energy and gas price caps is reasonable for European countries like France, which is less dependent on Russian gas for its energy production. However, the same couldn’t be applied to those European countries that heavily relied on gas imports. And other European countries, including Germany, who have relied on the US for the supply of gas thus far, have opposed the idea of a gas cap, given the price cap would create a shortage issue where they will not be able to fill in the gas storage at that price. Further, it would lower the overall power price but at the cost of the government’s fund to pay for the differences between the capped energy price and the actual running costs.

Merchant power companies without the high marginal costs of electricity production (i.e. input fuel), however, would be impacted from the revenue cap policy if it is in placed as they enjoy the super profits and we don’t foresee that there should be an upward adjustment to their revenue in such scenario. It will be set to allow costs and a reasonable profit margin to be covered.

We considered the inflationary revenue growth in the prior quarter. However, the evolution of the policies will have significant impacts on our forecasts, whereby the European government may impose a price cap policy to intervene, lowering the inflationary impact. We will wait for the finalized details before we apply further adjustments.

The current revenue growth rate to the merchant power constituents is in the range of 6% to 10% on an annualized basis between 2021 and 2023, which we will adjust depending on the development.

No adjustments will be performed to IC70 Renewable Power as the constituents in our universe are predominantly based on the contracted business model. Also, we will not adjust IC18010 Electricity Distribution Companies and IC8020 Electricity Transmission Companies, as they are regulated.

How the prices evolve from now will be, in our view, weather contingent. If winter is cold, then there will be sharp, sustained rises and in the next year, we would view electricity prices will be significantly higher (until demand is destroyed as a result of the higher prices and its impact on GDP).

At the time of writing, there are reports that the UK and EU Governments are planning on putting in revenue caps for the following TICCS classifications :

To date, there is little detail on the price, length of time and implementation dates of these caps. Significant issues need to be addressed, including what if the power generator has a pre-sold output at a price below the revenue cap. We await clarification and are watching these developments closely and will adjust our forecasts accordingly. 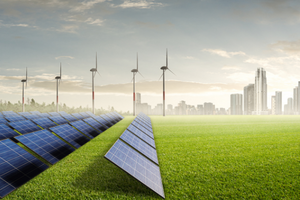