Support for infrastructure investment, the idea that asset owners should commit to long-term capital projects through a mix of debt and equity, is a powerful notion  at the heart of several important public and investment policy areas. It has  been much discussed. It has become a staple of high-level G20 and European Union  meetings. It has traveled from obscure trade publications to the mainstream financial  press. It has practically become fashionable.

Infrastructure investment has also long been the preserve of large, sophisticated players,  because it is complex and relatively expensive, but the many smaller pension  plans and insurers increasingly find themselves unable to avoid the question: ‘Why  aren’t we investing in infrastructure yet?’

Especially now. With listed infrastructure, suddenly anyone can invest in ‘infra’. A  liquid, easy-to-understand investment proposition offers to deliver all the benefits of  private infrastructure investment without the hassle of locking up funds with a private  manager or needing your own infrastructure deal team. Even your grandparents  could do it. In fact, they do – or so they’re told.

In a new Ecole des hautes Etudes Commerciales du Nord (EDHEC) position paper,  we document the dangerous rise of the so-called listed infrastructure asset class, an  ill-defined series of financial products that initially targeted retail investors and is increasingly  used by institutional investors, which now represent close to a third of the  market.

Promising to deliver the benefits of the infrastructure investment narrative, listed  infrastructure has been growing by 15 per cent annually for a decade, reaching at  least $57 billion in assets under management (AUM) today.  But a review of published academic research shows that these products fail to deliver  on their many promises. Listed infrastructure, as it is proposed to investors today,  exhibits high drawdowns and volatility, does not have better risk-adjusted performance  than broad market stock indices, and shows behaviour easily explained by a  series of well-known factor tilts available to investors throughout the sharemarket.

The number of false claims made about this asset class is high enough to consider a  mis-selling case, and in open letters to the United States Securities and Exchange  Commission and the European Securities and Markets Authority, we recommend  stricter regulatory oversight of these products, including the obligation to include the  word ‘listed’ in their names to avoid misleading investors, along with the obligation  to include information in marketing documents and information kits warning that  listed infrastructure may not deliver the same performance as unlisted infrastructure  investments.

We found that active listed infrastructure managers have invested in close to 1900  different stocks over the last decade, half of which cannot possibly be considered infrastructure  under any definition. They include brand names such as Amazon, Microsoft  and Nintendo.

The growth of listed infrastructure products is problematic because of the damage  that their proliferation will eventually do to proper infrastructure investing.  We believe in the potential of infrastructure debt and equity investment for asset  owners. We also see no reason why, in principle, some of the products used to access  the characteristics of underlying infrastructure assets could not be listed on public  markets.

But today’s fake infra will disappoint. It is comparatively expensive (fees are higher  than for other mutual funds) and will leave investors without the promised low-risk,  stable, inflation-linked returns. As a result, it could give a bad name to infrastructure  investing in general.

Fake infra could reverse years of investor education about the potential of infrastructure  assets as sources of portfolio diversification and liability hedging. It could  also undo recent progress in the prudential area towards recognising the existence of  a specific risk-return profile and capital-charge treatment for infrastructure debt and  equity.

It may even jeopardise the involvement of institutional investors in the next generation  of public-private partnerships that have come to underpin so much of the national  infrastructure plans most Organisation for Economic Co-operation and Development  governments have put forward.

Eventually, sharemarket regulators should aim to achieve a clear definition of the listed  infrastructure space, within which, listed infrastructure products that are better  and more transparent could be created, with the aim of delivering at least some of the  promises of infrastructure investment to asset owners.

Such a definition was developed in the context of the prudential regulation of insurers,  pension plans and banks. Sharemarket regulators can use it to define which underlying  assets would qualify to be included in listed equity products, as with other  categories or groupings of stocks.

We hope that those asset managers who are truly committed to infrastructure investment  will support our call for clarity in the public-equity space, so that listed vehicles  can be used to create products that genuinely offer new, rewarded risk exposures and  help support the worthy goal of matching long-term capital with the infrastructure  needs of the world. 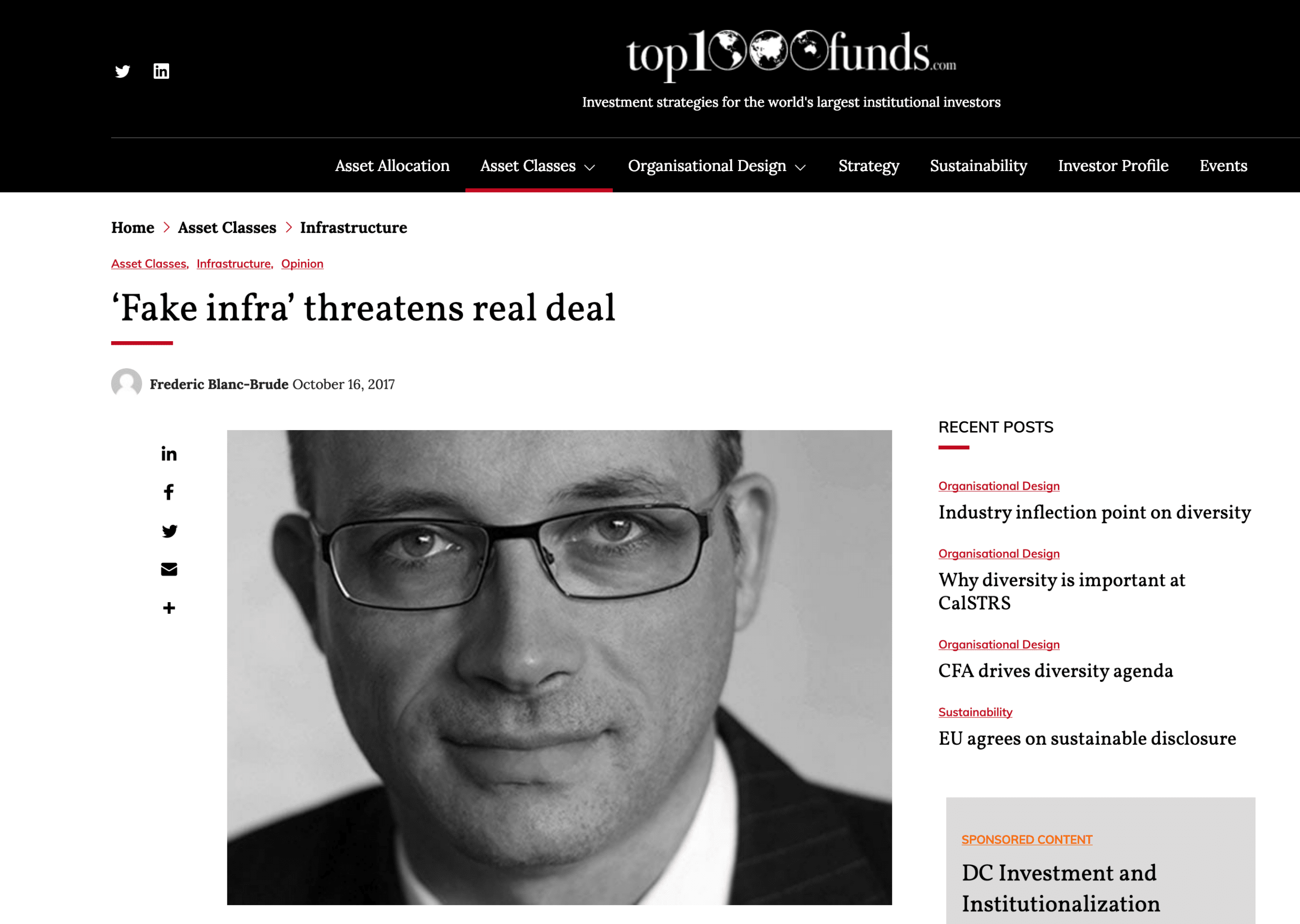