EDHECinfra Post
Gas is in the black, not green

Would excluding natural gas from the green taxonomy prevent the financing of transition fuels?

Natural gas is the transition fuel of choice. Should it be included in the EU Green Taxonomy as a result, since it needs new capital? In a new research note, we show that excluding gas generation from the taxonomy would not increase its cost of capital and thus not create any risk of underinvestment in the `transition fuel’ of choice. Conversely, including gas in the Green Taxonomy creates a genuine price distortion and a perverse incentive to limit future investments in renewable energy technologies.

The role of the Green Taxonomy is to promote investments in certain sectors because capital markets presumably do not have all the necessary information to make investment choices that fully reflect future risks, notably transition risks. If all relevant information about the energy transition was available today, markets could allocate capital to the correct projects without the need for a green taxonomy to signpost the future. By creating excess demand for certain investments, the green taxonomy is expected to drive down the cost of capital of the type of investments it promotes i.e., to create or increase an existing green price premium.

In effect, investors have already started pricing certain investments as greener, especially when it comes to their impact on the climate: they have been willing to pay a green price premium (receive a lower return) to hold greener stocks or unlisted infrastructure equity in sectors such as wind or solar power projects, as recent research has shown.

The EU taxonomy may further amplify this effect on asset prices. Conversely, it could limit the supply of capital to other energy sectors, especially brown ones that rely on fossil fuels such as coal and gas and drive up their cost of capital, that is, create a brown price discount. It is in this context that the inclusion of gas in the green taxonomy of the EU is being considered since it is a useful transition fuel even though it is by no means a zero-emission fuel.

Thus, a seemingly reasonable argument to include gas in the green taxonomy is the following: the taxonomy will cause capital to flow disproportionately to activities labelled as green by the regulator, and the cost of capital of brown energy sources will soar and lead to underinvestment in natural gas, which is the most important transition fuel for Europe. This in turn may lead to a messy energy transition, brown-outs, high energy prices, etc.

This argument is a fallacy: 1/ without coal (which is on its way out everywhere) and with limited and unreliable renewables gas is now the “producer of last resort”: it is a very valuable option and its cost of capital should be low; 2/ in effect, this has already happened: gas (and what is left of coal) are doing perfectly well in terms of profits and dividends. The past 5 years have been bumper years and the cost of capital of these gas producers is already at historical lows.

There is plenty of evidence that, even as renewables have developed, investments in fossil fuel have been doing very well indeed.

The level of dividend payouts (as a proportion of revenues) for these three sectors is has also stayed healthy in the gas and coal power sectors, albeit lower than in wind and solar projects. Coal projects continue to pay 8-10% of their revenues as dividends, gas projects 16-18% and renewables 25-30%.

In this light, neither gas nor coal power look like junk. In fact, the costs of capital of gas projects in Europe has been near its record lows in recent years. According to infraMetrics, The average equity risk premium of gas fired power projects in Europe peaked in 2009, since then the attractiveness of gas power projects led to a steady decrease in their costs of capital. Since 2015, it has reached a plateau at around 8% and even fell below that level in 2021.

Hence, there is no reason to argue that gas “needs to be green” so that we have enough investment in “transition fuels”. Everything point to gas being already able to secure all the capital it needs. Conversely, by saying that gas is green, you can slow down investment in renewables, and make gas even more valuable.

Option prices are determined by volatility. The ‘gas option’ is more valuable in a world without enough renewable energy capacity and predictability. `Green gas’ thus creates a genuine misallocation of capital since its very existence contradicts the opportunity to invest in better renewable technologies, especially energy storage. 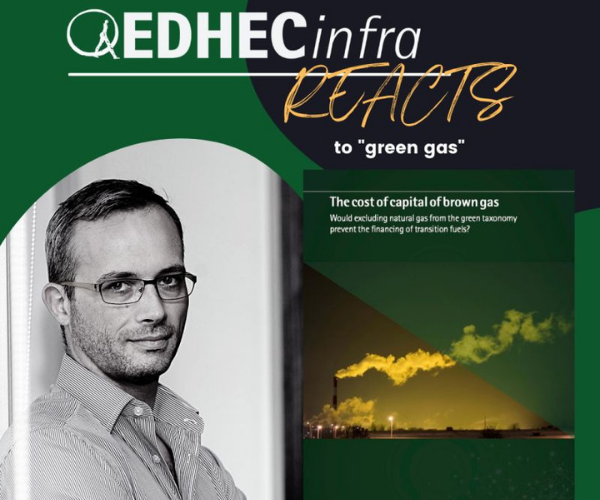