Are infrastructure firms different? Our motivation springs from what we have called the ”infrastructure investment narrative” (Blanc-Brude, 2013), according to which investors in infrastructure can look forward to low return correlations with the business cycle (hence potentially better diversification), as well as lower sensitivity to economic shocks (implying better drawdown protection).

Empirical evidence for or against such hypotheses has so far been very limited. This study is a first iteration in a series of research papers using a new, global and growing database of infrastructure investment data, and aims to measure the relative financial performance of such investments through the creation of fully-fledged benchmarks or reference portfolios.

This study makes use of the EDHECinfra database: a collection of cash-flow, investment and balance sheet data collected from infrastructure investors and creditors, as well as manually from individual firm’s audited accounts. To date, the database covers more than 500 individual infrastructure assets over 10 different countries and a period of 15-20 years, making it the most comprehensive database of infrastructure cash flows available for research.

For this study, we focus on firms situated solely in the UK: firms identified as being either special purpose vehicle created in the context of the financing of a specific infrastructure project, or a firm conducting specific infrastructure-related activities (such as a port or an airport) or a regulated utility.

Thus, detailed accounts for each firm were obtained from infrastructure investors, lenders and/or from Companies House¹ and analysed individually in order to classify each firm into one of three groups: Contracted, Merchant and Regulated infrastructure, which we describe next.

Merchant infrastructure firms in comparison are exposed to some degree of market risk. Such infrastructure projects can have long-term contracts supporting their revenue in the form of a Power Purchase Agreement (PPA) or take-or-pay contract, but as such contracts may cover only part of the project’s capacity or lifespan and the counter-party is typically not the Treasury. Other Merchant infrastructure firms are fully exposed to end user demand and market prices and include airports or toll roads.

Finally, Regulated infrastructure firms are typically natural monopolies involved in the provision of essential services, such as sewage treatment, water distribution or power transmission. In the United Kingdom, such companies are regulated by independent agencies such as Ofwat or Ofgem.²

The data span information from the early 1990s to 2015, as illustrated on figure 1. We focus on UK data because they represent the largest, longest and most coherent set of infrastructure cash flow data available at this time, with the added advantage of corresponding to a single currency and regulatory environment, thus limiting the need to control for these dimensions in the analysis.

Controlling for the different aspects of firm behaviour

Our sample of several hundred infrastructure firms is compared with a “matched sample” of non-infrastructure, UK firms, both private and listed.

Indeed, while public market data on infrastructure related firms has sometimes been used as a proxy of private infrastructure firms, recent research has shown that private firms exhibit significant differences in terms of size, capital structure and dividend policy: private firms tend to be smaller than listed firms, and to exhibit higher leverage, making their profits more sensitive to fluctuations in performance, to have different dividend pay-out policies than listed firms and to be less inclined to smooth their dividends in the presence of profit shocks.

Moreover, differences in ownership structure in private firms are also shown to explain differences in dividend pay-out policy between different types of firms (see Brav, 2009; Michaely and Roberts, 2012, for a detailed study).

Each of these three control groups is then ”matched” to each infrastructure firm-year observation of a given type using a ”nearest neighbour” methodology for total asset size, leverage and profitability and an exact match for ”investment year” i.e. the number of years since the creation of the firm.

Such tests go a long way in addressing the matter of the “uniqueness” of infrastructure investments. Indeed, if firm characteristics and corporate governance can be expected to explain in large part the business model and dividend pay-out behaviour of the firm, then for infrastructure to be unique and not easily replicable by combining other types of investments, it must correspond to a unique combination of firm characteristics and corporate governance.

Likewise, the revenues of infrastructure firms can only create a unique form of exposure to economic factors if their business model is not an easily replicable combination of the business models of other firms.

We find that, as far as UK data show over the past 15 years, infrastructure firms are indeed truly unique: that is, after controlling for size, leverage and profitability, as well as the impact of the investment ”lifecycle”, infrastructure firms exhibit lower revenue volatility and higher pay-out ratios (dividends to revenue) than any other group of private or public firms.

The combination of these findings suggests that infrastructure firms exhibit a unique business model in terms of revenues and profits dynamics compared to a large control group of public and private firms. Infrastructure firms have significantly lower volatility of revenues and profits and pay a much higher proportion of their revenues much more frequently to their owners, independent of the business cycle.

Another significant result is that each of the three types of infrastructure firms that we define (according to a typology we first described in Blanc-Brude (2013)) corresponds to a unique infrastructure business model as well i.e. albeit more alike amongst themselves then compared with the rest of the corporate universe, Contracted, Merchant and Regulated infrastructure firms have their own different cash flow dynamics.

Implications and Next Steps

These results have implications for investment management and prudential regulation:

Next steps, include using these findings to calibrate cash flow models to derive valuations of individual infrastructure assets (see for example Blanc-Brude and Hasan, 2015b) and to build reference portfolios that can be used as benchmarks by investors and regulators alike.

2 – Blanc-Brude (see 2013, for a detailed discussion of these different infrastructure business models) 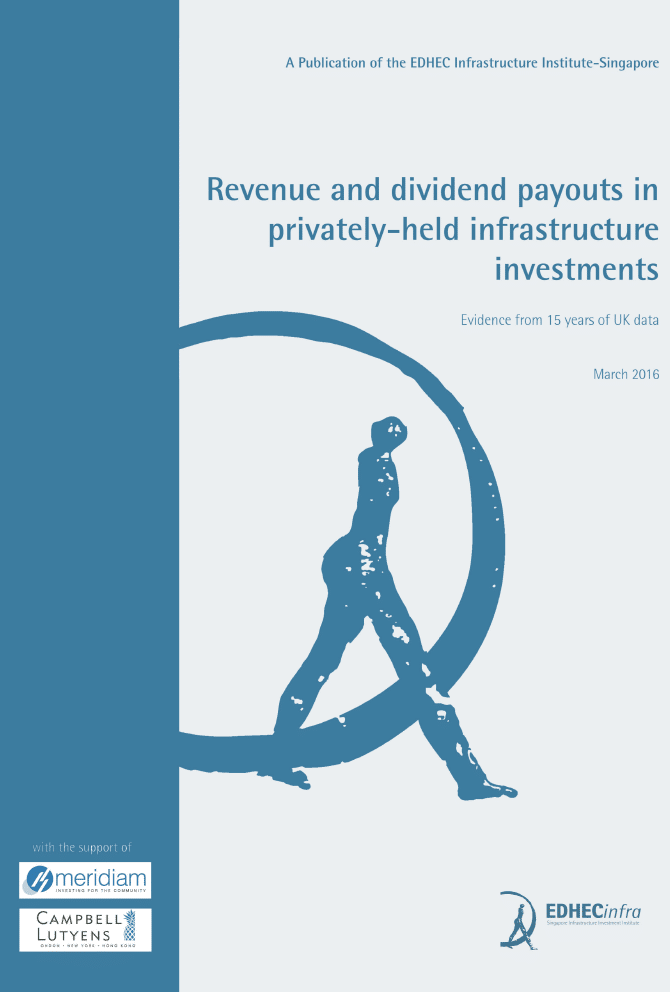