In this contribution to the exposure draft consultation on the “Your Future, Your Super” package, we do not comment on the general approach taken by the regulator to benchmark MySuper products but solely focus on the choice of benchmark for the unlisted infrastructure asset class. We propose abandoning the use of listed equity indices to proxy investments made in the unlisted infrastructure equity asset class in the proposed performance tests of MySuper products. We argue that recent advances in data collection and innovation in asset pricing provide a robust and academically validated alternative to the currently proposed benchmark. This listed equity index (the FTSE Developed Core Index) is wholly inadequate because it is not representative of the universe or of the risks to which Superannuation products are exposed when investing in unlisted infrastructure. Instead, the infra300, an index built to be representative of the unlisted infrastructure universe, constitutes a robust and fair alternative that can benefit plan members and managers alike as well as meeting the prudential objectives of the regulator.

In a short accompanying paper provided alongside this submission, we document and back up with data four key points and two recommendations, which are summarised below:

Thus, the FTSE Developed Core Infrastructure Index is not at all representative of the Superannuation fund portfolios, which are focused on the transport sector and a spread of investments over all other segments of the unlisted universe.

The FTSE Core Index also exhibits strong return correlation with listed markets with very high and significant levels of correlation in the 70-80% range with equities in and outside Australia and Real estate. Indeed, we find that more than half the number of constituents in the FTSE Developed Core Infrastructure Index are found in other APRA equity benchmarks, translating to a 91% overlap in terms of market capitalisation for the FTSE Developed Core Infrastructure Index. We also show that the FTSE Core index does not in fact represent a unique asset class when compared with the other benchmarks of the APRA Heatmap: it is already ‘spanned’ by the risk-returns characteristics of the other asset classes used in the Heatmap.

Looking at the financial characteristics of the FTSE Core Index and the infra300 index of unlisted infrastructure produced by EDHEC, we see that:

Thus, the FTSE Core Infrastructure Index is completely inadequate as a proxy for the unlisted infrastructure portfolios or strategies of Superannuation funds:

While a listed index is not adequate when it comes to capturing the characteristics of the unlisted infrastructure asset class, until recently the only alternative was an index based on private appraisals (like the ones mentioned and rejected in the 2018 Productivity Commission report). Indeed, as the 2018 PC report highlighted, this type of data suffers from multiple issues and biases including a lack of representativeness (selection and survivorship biases) and no robust measure of risk due to the ‘smoothing’ of appraisals and returns.

These issues have now been addressed by recent advances in research: a representative dataset of the investible universe, and measures of the mark-to-market performance of the unlisted assets in this representative sample i.e. applying IFRS 13 guidelines and using the latest transaction data to update the estimate of the risk premia that applies to each investment, are possible.

With this approach there is no more smoothing in the returns and a proper measurement of the variance of returns is possible. Representative and realistic risk and risk-adjusted characteristics are produced.

Thus, while the FTSE Core Index is shown to be wholly inadequate as a proxy for unlisted infrastructure, in particular in terms of coverage and representativeness of the investments made by Superannuation funds, it is possible to build and produce a fair benchmark of the unlisted infrastructure asset class: the infra300 is designed to be a bias-free, representative view of the ’principal’ market i.e. the main markets in which buyers and sellers of unlisted infrastructure companies are the most active, including Australian Superannuation funds. It is based on a mark-to-market asset pricing technology that captures the risks inherent to the asset class and produces robust, realistic results that can serve as the basis for benchmarking the investments made in MySuper products, as the example of the Covid-19 crisis demonstrates.

We look at the two performance tests that APRA currently produces for the Heatmap: the Simple Reference Portfolio (SRP) test and the Strategic Asset Allocation test (SAA) and consider how they may be impacted by switching the benchmark of the unlisted infrastructure asset class from the listed FTSE Core Index to the infra300 index of unlisted investments in infrastructure equity described in detail in the previous section.

We examine two potential evolutions of the treatment of unlisted infrastructure in the APA performance tests:

We argue that unlisted infrastructure should be considered more defensive since it possess properties that help protect portfolios in downside markets like lower VaR and lower maximum drawdown as shown by the infra300. This index also exhibits significant correlations with both international fixed income and Australian fixed income, asset classes that are considered defensive in the APRA classification, and lower correlations to listed equities.

Next, in the context of the SAA test, the use of the wrong proxy results in making incorrect conclusions as to how much value is added by managers. Implementing the SAA test with listed benchmark assigned to proxy unlisted infrastructure would lead to random, unscientific and fundamentally unfair outcomes:

Thus, using the infra300 index as the proxy of unlisted infrastructure does not overturn the results of existing SAA tests and preserves the regulator’s objective to apply a robust market test to Superannuation products. Because it uses the correct benchmark, as we argued above, instead of punishing managers randomly and unfairly, using the infra300 would reward those managers who invested skillfully in the relevant unlisted infrastructure market.

Looking at APRA’s Q2 2020 Heatmap, we see that the products that underperform in the SAA test do so on average by -0.63% (median -0.65%). This puts the small size of the mean impact on returns of switching infrastructure index in perspective: while the average effect is unlikely to change the test result, the more infrastructure plays a role in the product, the more relevant using the correct benchmark becomes and the more it makes a difference in the SAA test. More details are provided in the supporting paper.

Table 2: Impact of Using the infra300 (net, hedged-AUD) instead of the FTSE Core in the APRA SAA Test in 63 Single Strategy MySuper Products

These finding are in line the intent of the ‘Your Future, Your Super’ legislation and demonstrates the importance of including a relevant, representative benchmark for unlisted infrastructure investment.

Using the infra300 in the APRA Heatmap and subsequent performance tests would not only be much more representative of the underlying investments made and risks taken by investors in unlisted infrastructure but also help identify those managers that actually create value through these investments.

Our two recommendations to the Treasury and to APRA in the context of the reform of MySuper are to: 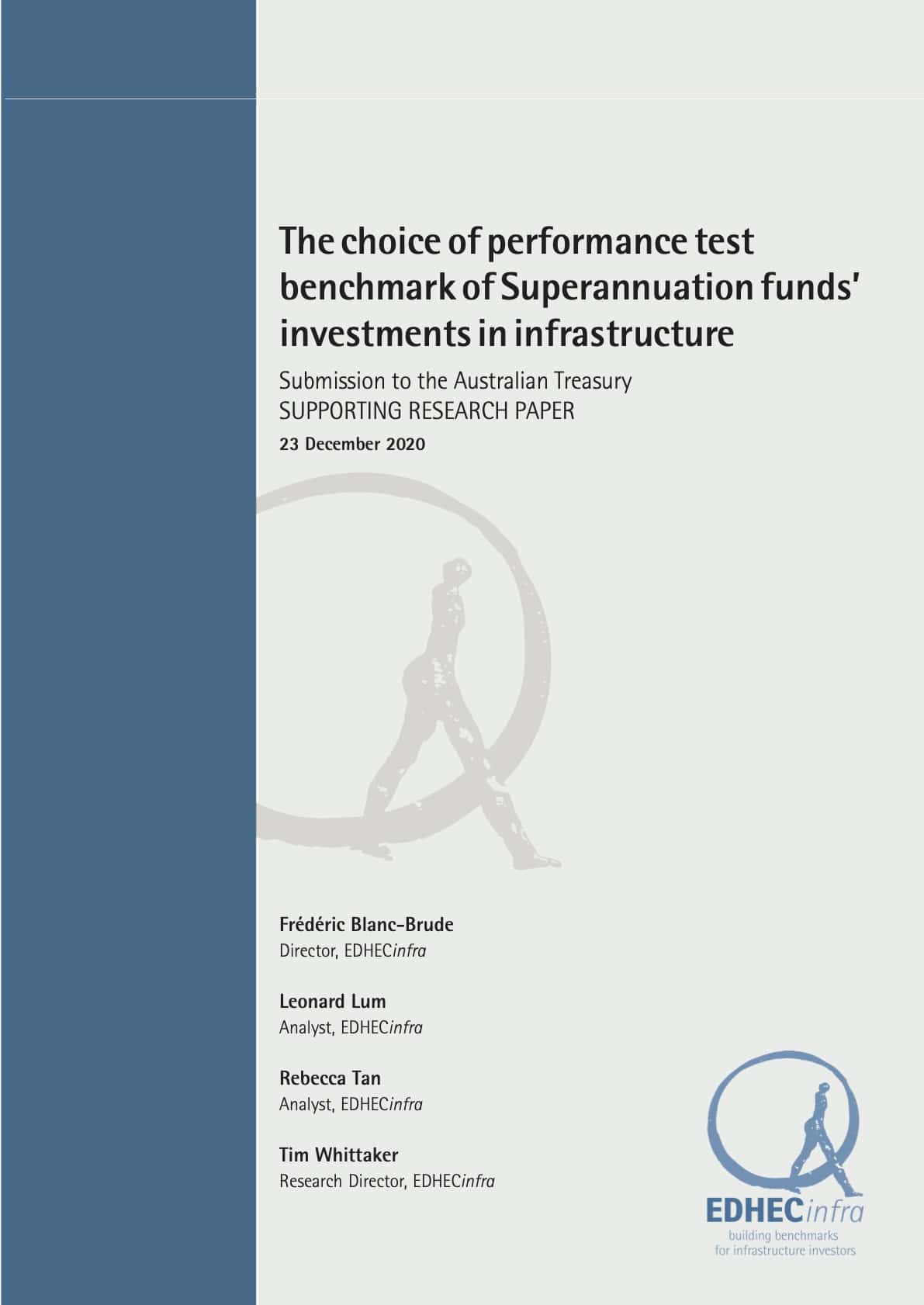