High hurdle rates are not in the interest of investors in infrastructure funds. This articles was first published in the Wall Street Journal in April 2021.

When closing a fund, the general partners (GPs) agree with their limited partners (LPs) on a hurdle rate: that is, a minimum return above which GPs will receive a share of profits. In effect, hurdle rates are benchmarks that fund managers must beat to be rewarded, and they would typically decide not to invest in projects with expected returns below that level.

“Fund managers have no other choice but to take more risk and add more fund leverage or stray from their original mandate to invest in infrastructure.”

Data shows that the hurdle rates of infrastructure funds have been stuck at 8 percent for the past 15 years. In effect, there is no difference between the hurdle rates of so-called ‘core’ funds, which are supposed to be investing at the lower end of the risk spectrum, and the ‘core+’ and ‘opportunistic’ funds that invest in risker, presumably higher return assets (see Table 1). Thus, despite considerable changes in market conditions, including significant yield compression, hurdle rates remain set in a completely ad hoc manner, without any relation to fair market prices.

“Eight percent has been the hurdle for private investment funds across several asset classes for a long time and simply keeps being re-used,” says Frédéric Blanc-Brude, Director of EDHECinfra. “When expected returns were in the double digits it made sense as a floor, but it has become completely decorrelated with the reality of the market.”

Conversely, looking at gross mark-to-market expected returns (Table 2) suggests that yields have indeed compressed over time, but also that different styles of infrastructure investing call for different levels of expected returns. This data shows that risks are properly priced in markets, yet they are not reflected in fund hurdle rates.

“It has been very hard to measure these expected returns in a robust manner until now,” says Mr. Blanc-Brude. “EDHECinfra data makes it possible, but this is a new development for the industry.”

With an 8 percent hurdle, equity investments such as renewables energy projects are virtually impossible. But as the data above shows, most funds continue to reproduce the same model. This situation creates misaligned incentives and unnecessary costs.

Faced with decreasing yield and stuck with a relatively high hurdle rate requested by investors badly informed on the actual market yield of infrastructure assets, fund managers have no other choice but to take more risk and add more fund leverage or stray from their original mandate to invest in infrastructure. In the end, these risks are passed back to LPs who are invested in vehicles that may not have the risk-return profile they intended. 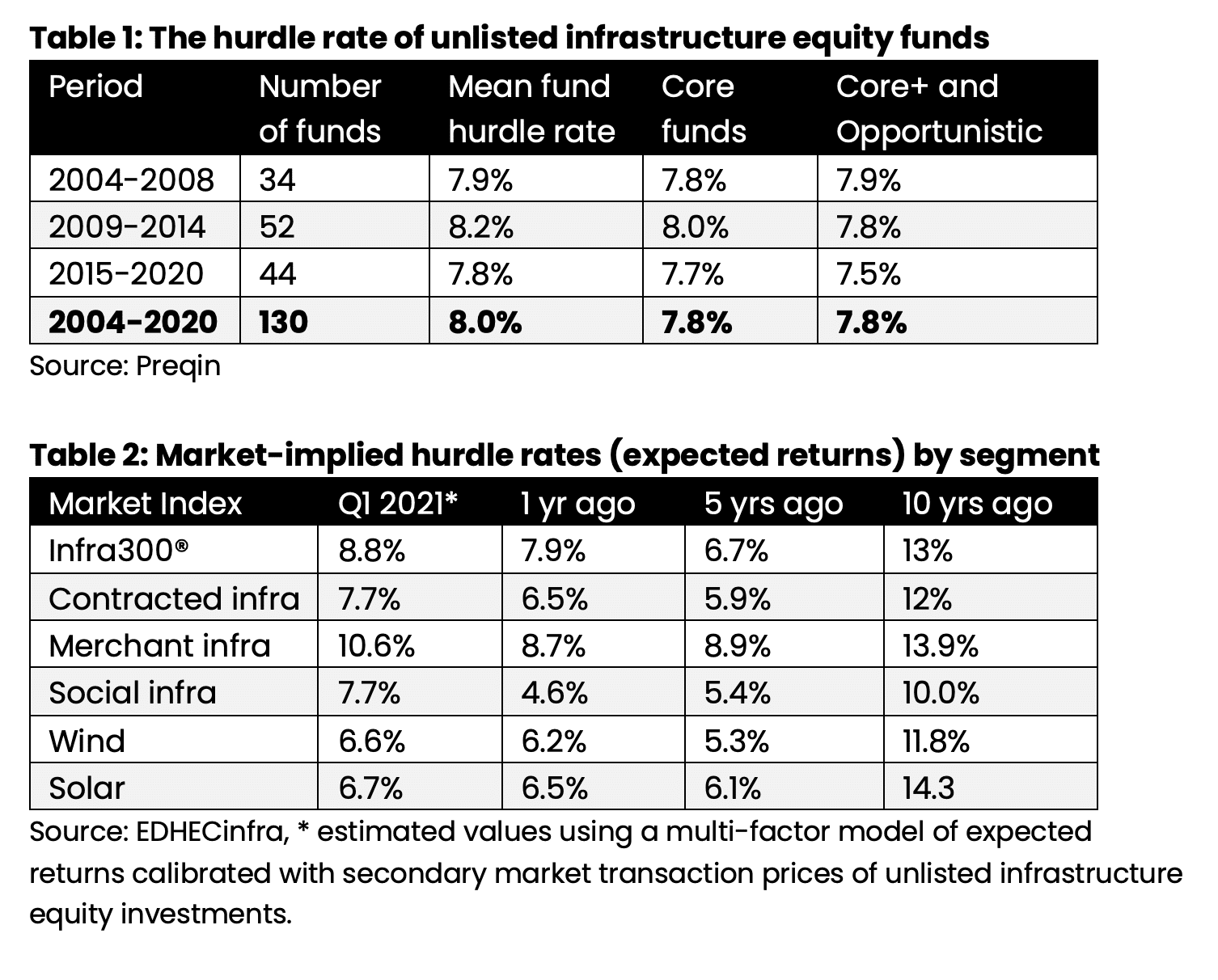 As a result, the assumption that a high hurdle rate is in the interest of investors in infrastructure funds does not correspond to reality. Nor does it create virtuous incentives for asset managers to manage the risks of their investments. Having decided to invest in ‘real’ assets via infrastructure funds, LPs may thus find themselves invested mostly in financial risks engineered to meet high hurdle rates that do not correspond to the reality of the market.

High hurdle rates also cost LPs entering funds at second or third close and having to pay equalization interests[1], which are calculated on the basis of hurdle rates instead of mark-to-market returns.

Finally, the opportunity cost of all this dry powder is enormous. Had even half of the infrastructure dry powder been invested in the infra300 index, which tracks the global unlisted infrastructure equity market, during the past 10 years, LPs and GPs would have been able to share approximately $100 billion of extra payouts. That’s at least 20 percent more than all distributions made by infrastructure funds over the same period. Instead, the accumulated commitments have yielded very little.

It is clear that by ignoring the expected yield implied by current market prices, investors in infrastructure funds are doing themselves a great disservice. 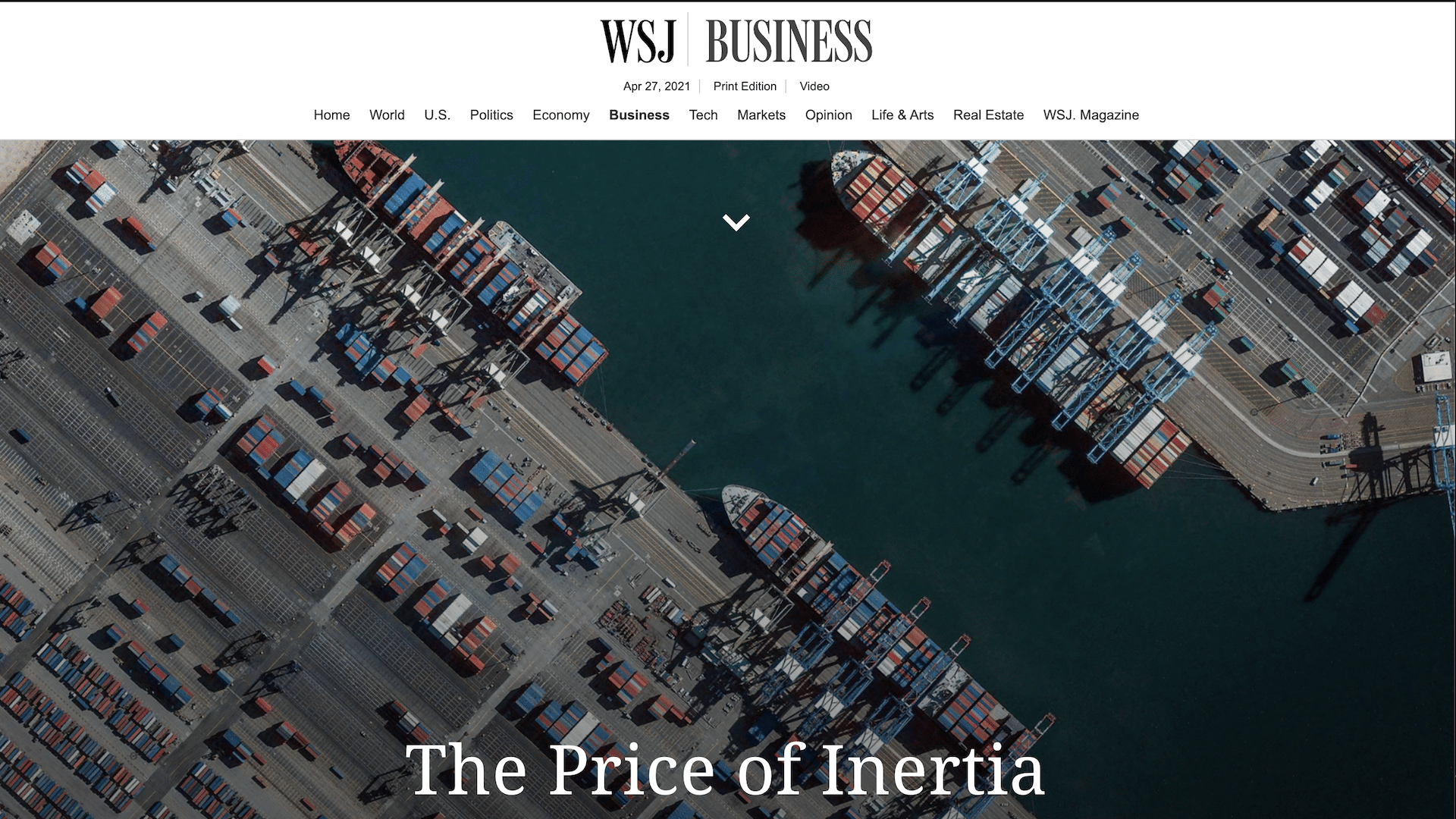