Well, what an interesting month it has been. The shortest and perhaps most chaotic term of any UK Prime Minister ended abruptly leaves a lot to be said.

But it wasn’t how the Liz Truss left office, it’s the events that led to her resignation that is relevant to infrastructure. The announced large unfunded tax cuts in an inflationary environment spooked investors and gilt yields spiked. This caused some rather large unintended consequences especially in the UK pension sector .

However, my favourite piece of analysis is from the FT Alphaville ($) where they quantified the “Moron Risk Premium” which is the yield spread between 30-year gilts and 30-year bunds. In the article Louis Ashworth estimated that having Liz Truss in charge resulted in a sharp increase in the cost of borrowing vs the German Government such that the UK was paying on average 70 bps more than the German Government. Academics quantified a similar premium in UK stocks.

But again, what has this got to do with infrastructure? Well, the sharp upward movement in the gilt yield curve had a significant impact on valuations. How significant? Well, between 31 August and 30 September 2022, interest rates (averaged across the yield curve), increased by 115bps. A rather significant jump. Now in the EDHECinfra valuation models we can examine the impact of changes in the risk-free rate on infrastructure valuations holding cash flows and other risk premia steady. Here we see  the reaction of the market to the ‘mini’ budget effectively caused infrastructure valuations in the UK to drop by a whopping 7.4% – wiping out approximately $6.5bn in value from the largest 100 UK infrastructure companies in EDHECinfra universe in just one month.

As a result, the infra100® UK index suffered its worst monthly performance on record in September (in local currency). Interest rates impacted the infrastructure valuations in other parts of the world as well, but far lower than the levels seen in the UK. For instance, Continental Europe suffered a 3.4% drop in valuations due to the rising interest rates – less than half of that in the UK.

And whilst interest rates are still elevated, according to the FT ($), the market has now received a ‘dullness dividend’ and the yield curve in October is not as high as it was before. Valuations have bounced back from their September low and the infra100® UK index has returned stronger performance in October. Back to “normal”, at least for now. 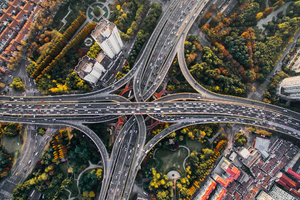